﻿﻿﻿﻿﻿﻿﻿﻿ Grandmaster Repertoire 6A - Beating the Anti-Sicilians by Vassilios Kotronias | Qulity chess a new in chess | Sachypalka.sk
﻿ 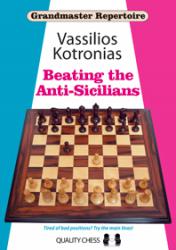 Grandmaster Repertoire 6A - Beating the Anti-Sicilians by Vassilios Kotronias

The Sicilian Defence is the most combative way to meet 1.e4, but Black’s hopes of reaching his favourite Dragon, Najdorf or Sveshnikov are often quashed at an early stage. In Grandmaster Repertoire 6A – Beating the Anti-Sicilians, grandmaster Vassilios Kotronias provides full coverage against White’s many attempts to steer the game away from Open Sicilian territory. Beginning with sidelines on move 2, and extending all the way to variations tested at World Championship level, the author provides expert recommendations against all White’s sensible deviations (as well as some not-so-sensible ones!) with specific advice tailored for 2...d6, 2...e6 and 2...Nc6 players. Be it tackling Wing and Morra Gambits head first, outmanoeuvring 2.c3 and Closed aficionados, bashing 3.Bb5† or ruining the Rossolimo, this book contains everything you need to make your opponents wish they had played 2.Nf3 and 3.d4! Vassilios Kotronias is an experienced grandmaster and ten-time Greek Champion. A Sicilian expert, he is feared for his profound opening preparation. ISBN 978-1-907982-63-7 - 504 pages - Published 9 December 2015