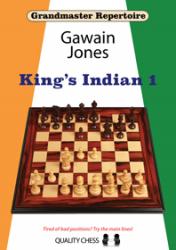 The King’s Indian is the ideal response to 1.d4 to combine dynamic counterattacking play with complete theoretical soundness. A past favourite of both Fischer and Kasparov, it continues to perform well at the highest levels of modern chess. King’s Indian 1 is the first of two books presenting a complete repertoire for Black. GM Gawain Jones is the perfect guide, being both a world-class player and a longstanding expert on the King’s Indian. This book version of Jones’s Chessable course has been extensively edited and reorganized by Quality Chess. This volume takes the opening moves 1.d4 Nf6 2.c4 g6 3.Nc3 Bg7 4.e4 d6 as the starting point, covering White’s main possibilities, such as the Mar del Plata, lines with an early h2-h3 and the Sämisch (5.f3). The repertoire will be completed in King’s Indian 2, including antidotes to White’s tricky tries after 1.d4 Nf6, as well as the King’s Indian versus the English Opening, Reti and everything else (except for 1.e4). Gawain Jones is an English grandmaster, twice British Champion and winner of the 2020 European Blitz Championship. He continues to use the King’s Indian as his main weapon against some of the best players in the world. 688 pages - Published 23 March 2022