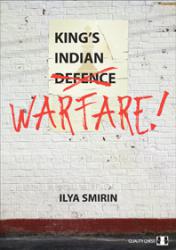 King’s Indian Warfare is a practical guide to the most dynamic and ambitious defence against 1.d4. Learn to play the King’s Indian like a world-class attacker from a life-long expert. Inside Smirin annotates his best games in the King’s Indian, explaining his successes, including his mini-match of four games over a decade against former World Champion Vladimir Kramnik, which Smirin won 2½–1½. From sacrificial feasts to positional masterclasses, this book has it all. Grandmaster Ilya Smirin is a three-time Israeli Champion, with a peak rating over 2700 and probably the most creative grandmaster of his generation.