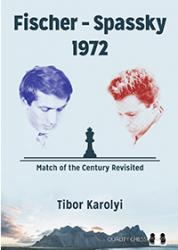 The World Championship match between Fischer and Spassky in Reykjavik 1972 was played at the height of the Cold War. The image of a lone American genius defeating the Soviet machine captivated a worldwide audience unlike anything else in chess history. Exactly fifty years later, Fischer – Spassky 1972 takes a fresh look at both the chess and the human aspects of this monumental match. Bobby Fischer is one of the greatest chess players of all time. His astonishing journey up to the 1972 match was documented in The Road to Reykjavik. In this volume, award-winning author Tibor Karolyi completes his study of Fischer’s career with in-depth analysis of the legendary Reykjavik match and the controversial Fischer – Spassky 1992 rematch. International Master Tibor Karolyi is a renowned author and trainer from Hungary. His biographical works for Quality Chess have received glowing praise from readers and reviewers. 520 pages - Published 31 August 2022