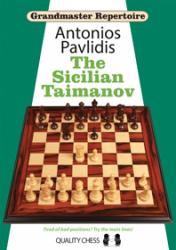 The Sicilian Taimanov by Antonios Pavlidis/Hardcover/

The Sicilian Taimanov arises after the opening moves 1.e4 c5 2.Nf3 e6 3.d4 cxd4 4.Nxd4 Nc6, and is an ideal weapon for Black in the modern era. It is theoretically sound, and strikes a perfect balance between solidity and dynamic counterattacking potential, which makes it a popular choice among club players and top grandmasters alike. GM Antonios Pavlidis is the ideal guide to this opening. A keen theoretician, he has been using the Taimanov as the backbone of his repertoire for many years. As a lifelong 1.e4 player, he is also adept at seeing the position from White’s perspective, making his insight all the more valuable to the reader. In this book, Pavlidis shares top-class analysis as well as the expert knowledge he has gained from his many years of experience with the Taimanov. Antonios Pavlidis is one of the brightest talents in Greek chess. He became a Grandmaster in 2014, at the age of 21. Amazingly, he has won the Greek Championship three times in three attempts, all before his 24th birthday. He is an expert on the Taimanov, having played both sides of it for most of his chess career.